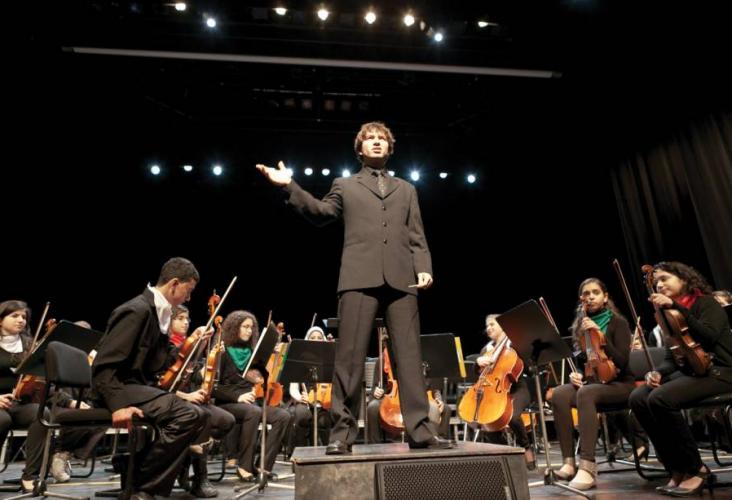 The ESNCM Orchestra comprises current and former students, teachers and friends of the ESNCM, and guest students from other music institutions. The orchestra gave its first performance at the Friends’ Boys School, Ramallah, in May 2004. From humble origins it has developed into a 75-member ensemble. The orchestra delivers diverse programmes of orchestral music to local audiences, and the music is often introduced and discussed from the podium or from the stage by the students. Participating in the Orchestra provides a first-rate training experience for young Palestinian musicians.

The orchestra’s programmes include arrangements of traditional Arabic music, alongside music by the greats of classical music. Highlights have included the annual Nativity Church concert in Bethlehem (broadcast internationally on television), a performance of the Requiem mass by Gabriel Fauré in collaboration with the Jerusalem Chorus, events staged by Unicef and UNDP, the first orchestral concert in Hebron, and a concert performance in Dubai. The annual ESNCM Concerto Competition provides advanced students with the opportunity to perform a concerto with the ESNCM Orchestra in its Spring performance.

To be eligible for participation in the orchestra, students must normally have reached at least level 6 standard (ABRSM / ESNCM) on an orchestral instrument.

All enquiries regarding the ESNCM Orchestra should be directed to Ms. Zeina Khoury- Orchestra Manager: zkhoury@ncm.birzeit.edu, +970-2-281-9156.