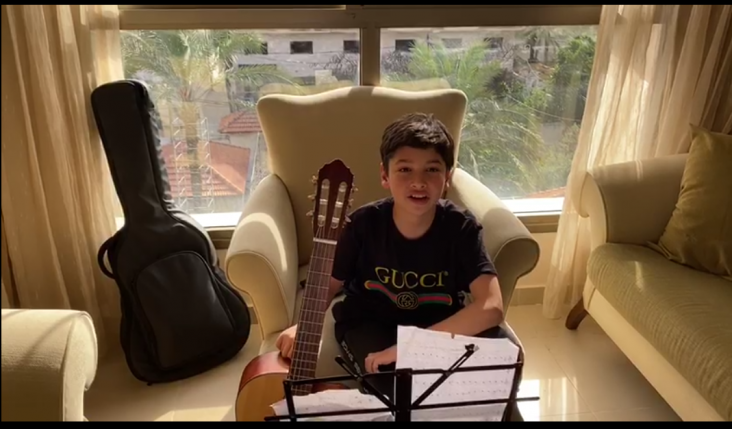 In response to the rapid and unprecedented developments that shook the world and our country with the outbreak of the COVID-19 pandemic, and following the declaration of a state of emergency that brought life in Palestine largely to a halt in early March, the Edward Said National Conservatory of Music immediately adopted distance learning via electronic media to continue the educational process. This approach enabled the hundreds of students who are studying music in Jerusalem, Gaza, Bethlehem, Ramallah, and Nablus to continue the study of their instruments despite challenging circumstances.
A number of the Conservatory’s professors took the initiative to record and publish their compositions. Among them “Music Under Quarantine” by Tamer Sahouri, head of the Arabic Music Department, that aimed to bring together students and professors of the Conservatory with musicians from all over the world, encouraging them to submit musical compositions from their homes. More than forty musicians responded to this initiative.
Another group of musicians from Palestine and abroad presented “Ya Dar” (“To My Home”), a piece composed by Ahmed Al-Khatib. Initiated by Anas Al-Najjar, the ESNCM’s academic supervisor of the Gaza branch, this project resonated well with many young musicians.
Furthermore, ESNCM students of various ages and academic levels and from all branches presented performances of oriental and western music, videotaped at their homes in response to requests by their teachers. These activities helped Palestinian children adhere to the lockdown measures and endure stay-at-home orders, implementing the procedures required by the World Health Organization.
On the other hand, the Conservatory had to cancel many vital programs, such as the external education program and choirs in local schools, as well as courses usually offered in the branches as part of the formal education program, such as the branch choirs and various types of group education. Main activities had to be abandoned as well, among them the Palestine National Music Competition 2020, one of the Conservatory’s most important programs, and the Jasmine Festival, a series of concerts that specializes in classical music and jazz. Many other concerts and shows, planned to be held in Jerusalem, Ramallah, Bethlehem, Nablus, and Gaza, had to be canceled as well.
As we are currently celebrating the fasting month of Ramadan, the entire family of the Edward Said National Conservatory of Music wishes to congratulate the Palestinian and Arab people, hoping that this time will bring good tidings and blessings – and that humanity will overcome these trying times unscathed.