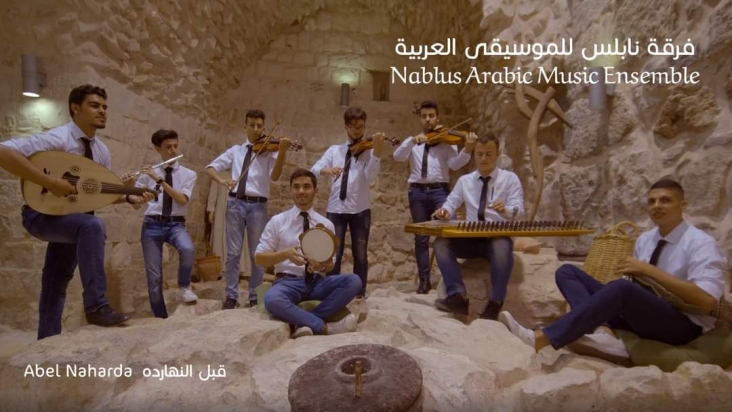 "Before Today," composed and arranged by Ammar Al-Shari’I and supervised by Yaqoub Hammouda, features Firas Al-Aghbar on oud, Mohammad Sadouq on qanun; Ahmed Sadouq and Ibrahim Al-Masry on violin; Rashed Zaarour on viola and cello; Wasim Al-Shakhshir on flute; Nadim Khoury on raq; and Hamza Al-Shakhshir on tabla. The sound recording was carried out by Ihab Haniyyeh, and the filming, photography, and editing by Gert Clausen.

The filming took place at Khan Al Wakala, Salim Effendi, Nablus, the sound recording was carried out in the Conservatory’s studio in Ramallah, and the work was produced by the ESNCM.

The Nablus Ensemble for Arab Music was established at the ESNCM’s Nablus branch by a group of students and teachers. Since its inception, the band has performed many concerts in Nablus, Ramallah, and Jerusalem, including a performance of “One Day and One Night” playing a collection of songs for the late singer Warda.

To enjoy a recording of the group’s performance, watch video