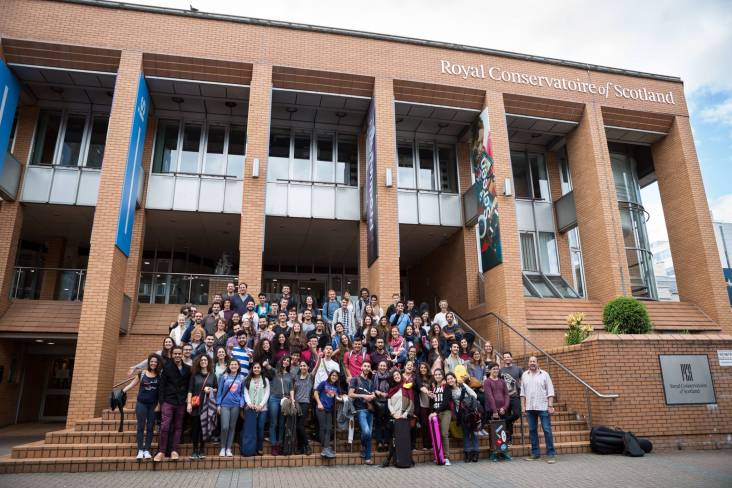 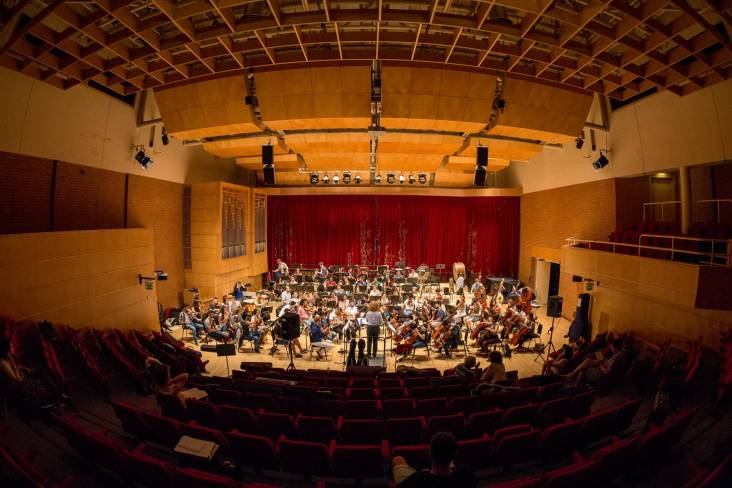 The Palestine Youth Orchestra (PYO) arrived late Sunday night, 17th July, into Glasgow after a 45 hour hectic trip via Jordan. Members of the orchestra living in the West Bank had to cross the Allenby bridge to get to the Amman airport as Israel does not allow them to travel through Tel Aviv. The 80 member orchestra of the Edward Said National Conservatory of Music (ESNCM) that is made up of Palestinians and young musicians of Palestinian origin from all over the world, came together in Glasgow where they will be hosted by the Royal Scottish Conservatoire (RSC) for the next seven days in an intensive training camp. The Orchestra will rehearse under the baton of British conductor Sian Edwards and a team of top level coaches from the RSC and the Oslo Philharmonic Orchestra, a long standing partner of the PYO. Orchestra members will be joined by 15 British music students from RSC and other UK schools of music. This has become a tradition of the PYO: as it tours the world it makes it a point to invite young musicians from the host countries to join it, aspiring to promote exchange and friendship.

Two fifteen year old music students from the Gaza strip, Raslan Ashour on trumpet and Sofiya Radwan on violin were denied exit out of Gaza by the Israeli occupying forces, who stated that the reasons for the exit request were unjustified. Suhail Khoury, General Director of the ESNCM and the founder of the PYO, questioned the occupation's logic, saying that it is Israel that has to justify its ongoing inhumane siege of more than 1.8 million people in the Gaza strip. It is ironic that students of classical music from the Gaza strip have to justify to the Israelis the reasons for trying to have a normal life, while the world is not doing anything to end this atrocity, added Khoury.

The PYO tour, which is organized by the Friends of the ESNCM in the UK, a British registered charity, will début in Perth on the 25th of July. The Orchestra will then perform at the Glasgow Royal Concert Hall as part of the International Society for Music Education's conference activities currently underway in Glasgow. The orchestra will then travel south to Leeds and Birmingham on the 27th and 29th of July respectively, and then to Cardiff on the 30th. The tour will end at the Royal Festival Hall in London where a sellout is expected at this magnificent concert hall.

The PYO's program for the UK tour will include Beethoven's "Leonore" Overture and Mussorgsky's "Pictures at an Exhibition" as well as "Metal", a contemporary piece by British composer Graham Fitkin. The repertoire will also include three Arabic songs: two by the Rahbani Brothers - "Ruddani ila Biladi" and "Ahtarif al Huzna wal Intithar", as well as Zakaria Ahmad's "Biridhak ya Khaliqi" to be sung by the young Palestinian rising star Nai Barghouti.

The PYO's 12 year history has taken it to France, Italy, Germany, Greece, Bahrain, Oman, Jordan, Syria and Lebanon. The UK tour promises to be the most prestigious for the orchestra so far.