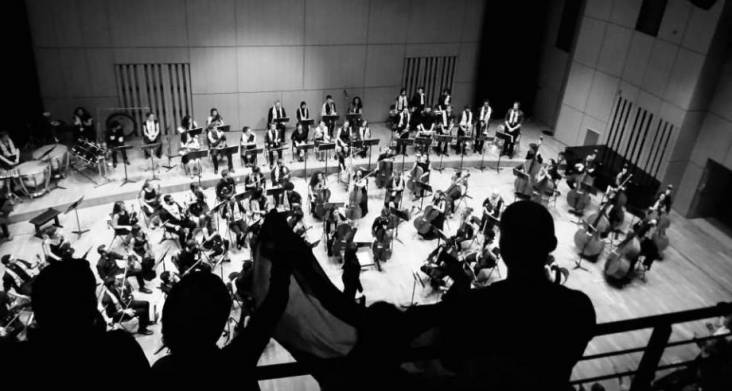 The Palestine Youth Orchestra started its 11th year with a successful tour in France. The tour took place in the cities of Paris, Lyon and Aix-en-Provence between the 26th and the 29th of August 2015. With the captivating performance of the Palestinian – Japanese Soprano, Mariam Tamari, and under the baton of the French conductor Nicolas Simon, the orchestra had an immense success, with around a total of 3600 attendees in all three concerts. The Edward Said National Conservatory of Music (ESNCM) organized the PYO tour with the cooperation and support of a number of Palestinian, Arab and French organizations, particularly the Regional Music Conservatories of the cities of Aix-en-Provence, Lyon, Paris and Aubervilliers, in which the orchestra was generously hosted in preparation for the concerts between the 16th and 25th of August. In particular ESNCM recognizes the role played by former ESNCM staff Michele Cantoni and Mathilde Vittu in the organization of the tour.This year the orchestra brought together 85 musicians mostly Palestinians residing in Palestine and the Diaspora, as well as other Arab musicians from Syria and Egypt and 15 musicians from French conservatories.
The first concert of the tour took place in the concert hall of the “Conservatoire a Rayonnement Regional de Paris” on the evening of the 26th of August. The Palestinian Ambassador to France, Hayel Fahoum, welcomed the orchestra with a few words about the importance of culture in Palestine, and the significant role the orchestra plays in highlighting the Palestinian cause and the resilience of Palestinians through music and cultural activities.
The concert started with the vibrant and enthusiastic Overture from King Lear by Hector Berlioz which was inspired by the original tragedy by William Shakespeare, followed by two songs brilliantly sung by Mariam Tamari; “Je veux vivre” an extract from the well known opera “Romeo and Juliet” by Charles Gounod and “E strano… Sempre libera” an extract from “La Traviata”, an opera by Giuseppe Verdi. The orchestra then moved on to a contemporary piece by the French-Lebanese composer Naji Hakim, who is Palestinian by origin. “Baalbeck”, a piece inspired by Lebanese Folkloric Music, was premiered in France by the PYO. Hakim attended the concert with great joy and excitement. After a short break, the orchestra finalized its first concert with Tchaikovsky's popular 2nd Symphony nicknamed “Little Russia”, a joyous, jubilant and festive piece that ended with a standing ovation.
“I am very happy and excited to see the musical level in the PYO this year, which of course was achieved after an intense 7 day period of very long full day rehearsals” noted Zeina Khoury, the acting manager of the PYO. “This orchestra is the real ambassador for Palestine around the world. It is difficult to express the joy I feel when I see all these Palestinian musicians come together from all around the world to play as one.” Khoury went on to stress the importance of having two new players join the PYO from the ESNCM’s Gaza branch this year. “Reema Alhaddad and Raslan Ashour who both play the trumpet, are a very special addition to our PYO family. Other than the musical importance of course, their presence is symbolic and political.” She adds that it was almost impossible to get the students out of Gaza due to the obvious unreasonable and very difficult traveling situation that the Israeli Authority poses on the Palestinian people living in Gaza.
The second concert took place at the amazing open air “Fourviere” ancient Roman amphitheatre in the city of Lyon. This concert was the most attended with about a total of 2000 people. The orchestra members were then hosted for dinner at the Lyon Municipality and were very kindly welcomed by the deputy mayor who emphasized the importance of culture and praised the wonderful concert and the musical skills of the orchestra.
The Palestine Youth Orchestra concluded its France tour at the magnificent Grand Theatre de Provence in the city of Aix-en-Provence. With 1000 people present, The Palestine Youth Orchestra took the audience by storm. The players finished the tour with an energetic and passionate concert. “I have never felt such energy with any other orchestra” mentioned Flavien Roger, the principal bassoonist and one of the French players who joined the orchestra for the tour. “After playing with the PYO, I am more motivated to play with other groups of people. There is a sense of family and union that is very special and unfamiliar to me and I think it’s wonderful.”
The ESNCM would like to thank all people and organizations that contributed to the French tour success: Bank of Palestine “the ESNCM cultural partner”; European Union; SIDA - Sweden; A. M. Qattan Foundation,  Muna and Basem Hishmeh Foundation, Near East Tourists Agency NET, Arab Palestinian Investment Co APIC, Consolidated Contractor Company - CCC, John Paul II foundation, Conservatories and Municipalities of Aubervilliers, Lyon, Paris and Aix-en-Provence, Palestinian Ministry of Culture, Palestinian Embassy in France, AFP, Mr. Michele Cantoni, Ms Mathilde Vittu, and all ESNCM individual friends and supporters.
Tags:
PYO
Palestine
Youth
Orchestra
France
Nicolas
Simon
2015